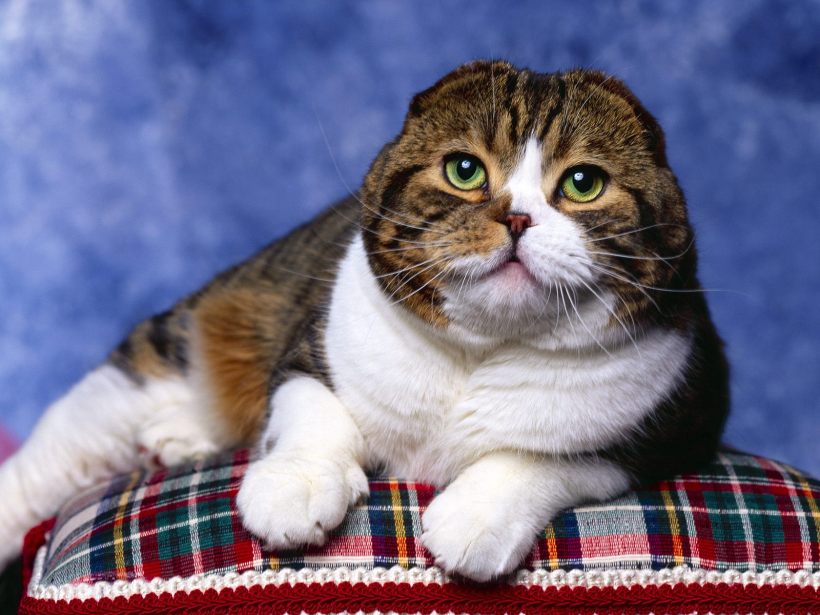 Of all the cats I have ever seen or been around, the Scottish Fold is one of the cutest and certainly one of the most endearing.

Scottish Fold Cats are frequently referred to as teddy bear cats or owl cats and one look at them tells you why. This cat breed has a genetic mutation that causes their ear cartilage to contain a fold and that fold causes the ear to bend forward and down toward the front of the head.

The first cat found with this mutation was a white barn cat named Susie. She was found in 1961 and of course, was found at a farm in Scotland. Breeders became interested in the cats with the folded ears and the rest, shall we say, is history.

The original Scottish Fold cats had one fold in their ears. Through selective breeding there is now a double or a triple crease that causes the ear to lay flat against the head.

Interestingly, all Scottish Fold kittens are all born with straight ears. The folds begin to appear at about three weeks and not all kittens will develop them. Yes there are actually straight eared Folds, and they usually have the same loving personality of their flat eared relatives.

This is a medium sized breed and the entire appearance of this cat is rounded. Rounded head, rounded body, rounded whisker pads and most of all huge rounded eyes. Males of this breed weigh from nine to thirteen pounds and females weigh in at six to nine pounds. Generally hearty, their life expectancy is around fifteen years.

Folds are good natured and placid cats with a soft spoken chirpy voice. They adjust to other animals in the household well and they are wonderful with children. These cats are by nature affectionate and they tend to become very attached to their human caregivers. In fact, if they are not being lap blankets to their caregivers, you will almost always find them in close proximity to the object of their affection. Folds are also quite playful and intelligent. They adapt well to people and situations.

Another interesting thing about this breed is that all its purebred members can trace their ancestry back to the original Susie and her offspring. That is very unusual in a purebred line of animals.

This breed can suffer from stiffening of the tail. The careful cross breeding with both American Shorthair and British Shorthair cats gave the Fold its distinctive round body as well as nearly eliminating the stiff tail problem. But, the condition doesn’t show up in kittens, so be sure to discuss it with the shelter or breeder that you get your Scottish Fold from and have the cat checked.

One more interesting habit of this breed. They seem to have a love of putting their bodies in some very non-catlike positions. Many of them like to sleep on their backs, sit in a ‘Buddah’ position or flatten themselves on the floor like a miniature bear rug.

Since this cat can be either long or short haired, grooming can be different for various members of the breed. One thing for sure, you need to check their ears often as they can become dirty over time and must be cleaned. These ears are wonderful features and they need to be treated with care.

Okay, so we have a breed that comes in all colors or combination of colors including white, has either long or short hair, is devoted and loyal, gets along well with other animals and humans, is loving and has a great temperament. What more could anyone ask for?

Above text copied from:
http://www.fluffyfeet.net/wp/2009/10/12/scottish-fold-the-teddy-bear-cat/

This site uses Akismet to reduce spam. Learn how your comment data is processed.

All content on this site ©Adeeyoyo aka DGA aka Denise G Allen unless expressly stated otherwise.

This work is licensed under a Creative Commons Attribution 3.0 Unported License.

we are in
SouthAfricanPlanet
South Africa

we are in
SouthAfricanPlanet
South African blogs

Join 1 Goal: Education for All

http://www.join1goal.org/home.php 1GOAL is a campaign seizing the power of football to ensure that education for all is a lasting impact of the 2010 FIFA World Cup. By bringing together footballers and fans, charities and organisations around the world we can call on world leaders to make education a reality for 72 million children by 2015.
Denise Allen

From Around the World